my first job in boston was working for a catering company and despite the long, grueling hours, it was a great way to get to know a city you’ve just moved to. my next job after that, my first official publishing job, is where i met nancy. nancy is a doer, a planner, a let’s go explore type of gal. i like to think i’m those things — and i can be if needed — but i’d much more comfortable being the tag along kind of girl. the one who just has to say yes. and when nancy is the one doing the asking, it’s very easy to get caught up in her infectious love of the city.

this past saturday, i did something i’ve always wanted to do. i got to be an extra in a movie. a hollywood movie. ever since massachusetts passed a law giving out tax breaks to movies that shoot locally, you can barely turn a corner without running into some set. but i’ve always been the outsider. not saturday night.

the movie is TED starting mark wahlberg and mila kulnis and is directed by seth macfarlane (creator, writer, actor of FAMILY GUY). they needed 2500 extras to film a concert scene with a “grammy winning artist” and they needed the extras to be there from 7pm to 3am. despite the crazy hours, nance was game and so was i.

and, well, since it’s hollywood, i’ll just roll the camera. (uh, it was my cell phone camera, so pardon the shoddiness of the shots. i’m no movie director.)

we arrived at 6:30 (call time was 7pm), signed in, got our raffle ticket/set pass, and settled in behind the caution tape. everyone was casually spread out on blankets and chairs. the low humidity and temperatures of mid 70s put everyone in a grand, hollywood type of mood.

as night fell, the lights went up and i realized exactly why actors look so good all the time. they have lights like this following them around. *note to self, buy one of these and hire someone to carry it around.* 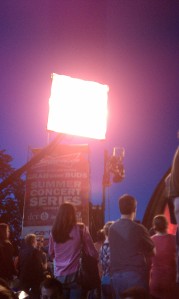 the grammy winning artist? miss norah jones. she’s the teeny one in the green dress with her arm out.

the movie cameras were all on these massive contraptions. (the crane starts at the bottom left of the picture and rises upwards.) roll sound, roll camera, ACTION. 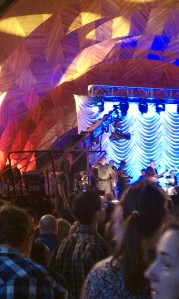 and here are the stand-ins. norah jones’ stand in is right as the blue meets the brown background and dominic, mark wahlberg’s stand-in is one next (ish) to her. and the third guy is the director of photography. ever seen LOVE ACTUALLY? yup, those kind of stand-ins. wait, no, not THOSE kind of stand-ins, but yes, they have people who are of similar look, size, and shape stand on stage while the set crews adjust the lighting and camera angles and whatnot. they are up there for hours, and then the actors arrive and are there for mere minutes. i can see why stand-ins are needed. they help keep the budget semi under control. 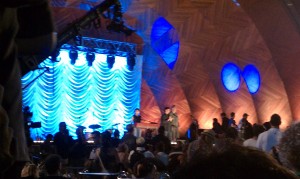 and now, mark wahlberg has entered the building. he was HILARIOUS. in this scene, norah says her line “i’m going to rest my chops for a minute, so i’m going to invite up a friend of mine who’s here to sing a song for a special lady in the audience. (or something like that.) and then she has to introduce mark wahlberg’s character, john bennett. except, the first time she said his name, she said, “here’s mark.” and after a brief moment of embarrassed silence, we all burst out laughing. after going through the line again and saying the correct name, mark comes up and says, “thanks, alicia keys.”

after the novelty of the evening began to wear as thin as the hour on the clock, i realized something. maybe it was the surge of sugar from the mountain dew i chugged at midnight or maybe it was the bright lights setting the scene, but there i was right in the middle of the action. so much in the middle of it that i will not be visible at any part during the movie, but that’s not the point. the point is I WAS THERE. i wasn’t on the sidelines anymore.  i was living a (mini) dream because of nancy. that’s the kind of friend she is.

i can’t wait to see what our next adventure entails.

i’ve got my “yes” all prepared.