the members of the BOOK HUNGRY are (alphabetically): patty blount, kelly breakey, blake leyers, karla nellenbach, and myself. we pick a book to read. we discuss via phone. we post a review on our individual blogs the 3rd thursday of the month. click on their names above and enjoy.

CITY OF BONES by cassandra clare 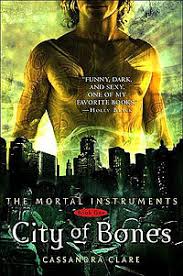 what it’s about from amazon:

When fifteen-year-old Clary Fray heads out to the Pandemonium Club in New York City, she hardly expects to witness a murder—much less a murder committed by three teenagers covered with strange tattoos and brandishing bizarre weapons. Then the body disappears into thin air. It’s hard to call the police when the murderers are invisible to everyone else and when there is nothing—not even a smear of blood—to show that a boy has died. Or was he a boy?

This is Clary’s first meeting with the Shadowhunters, warriors dedicated to ridding the earth of demons. It’s also her first encounter with Jace, a Shadowhunter who looks a little like an angel and acts a lot like a jerk. Within twenty-four hours Clary is pulled into Jace’s world with a vengeance, when her mother disappears and Clary herself is attacked by a demon. But why would demons be interested in ordinary mundanes like Clary and her mother? And how did Clary suddenly get the Sight? The Shadowhunters would like to know. . . .

Exotic and gritty, exhilarating and utterly gripping, Cassandra Clare’s ferociously entertaining fantasy takes readers on a wild ride that they will never want to end.

i’d read this book before, but it was so many moons ago and i didn’t remember enough about it to be able to participate in the monthly call, so i requested it again from the library.

as i re-read it, i recalled my initial reaction was “meh” and the end was “eww.”

those impressions didn’t change with a second re-read.

i mean, this book was fast paced and interesting up until the end. i didn’t like the end at all. it doesn’t make me want to read the other books, of which the gals informed me, there are four more, not to mention a movie coming out. i realize there’s a huge following of this series (and her other one) but i don’t see the appeal here. maybe i’m tired of paranormal? maybe i’m not a huge fan of what the ending suggested?

blake did tell us not all is as it seems, but again, with my bookshelf overflowing with books i’m desperate to read, i don’t think i’ll be sticking with the mortal instruments series. maybe later i’ll try the infernal devices series…?

have you ever read a very popular book and felt the opposite way from public opinion?

p.s. during our call, i learned that cinnamon and cayanne pepper are two spices that help increase metabolism. who knew? well, karla did and now i do too!