or, more specifically, what’s in my name?

talk of names has been a topic of conversation lately because, well, you know, but it turns out i didn’t know the full story of my own name.

that story starts off unexpectedly as my arrival was three months early. with a 5 yo (brother G) and a 2yo (sister J) already running through the house, my parents didn’t have much time to sit and discuss names, especially at such an early stage in the game. needing a name (pronto!) not only because the NICU nurses asked about it, but because my mom was afraid i wouldn’t fight to survive if i didn’t have a name, my parents opened the book of baby names and found the first one they liked which also happened to be on the first page.

because i was so tiny, they’d call me abby because it was a better fit and when i became president, i could go by the more official name of abigail.

this i knew, but my middle name was the story i hadn’t heard. seeing as i was a wee tot (weighing in at a mean fighting weight of 2lbs 6oz), my mom felt i needed a name to ground me to the real world, to tie me to someone who loved her and would do anything to keep her alive.

she gave me her name. 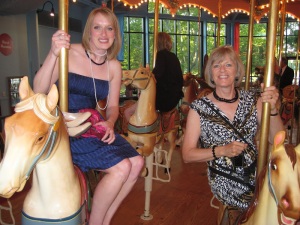 and that’s the story of how i became me, or well, how i came to wear such a name.

how about you? how’d your name end up on you? were your parents considering any other names? what about nicknames? any usual ones? unusual ones?