it seems fitting i begin the new year by reflecting on the old one and in the late months of last year, i went on a trip. a BIG one. one that’s taken until now to completely process because (a) the jet lag was so intense and (b) it was unlike anything i’d ever experienced before. 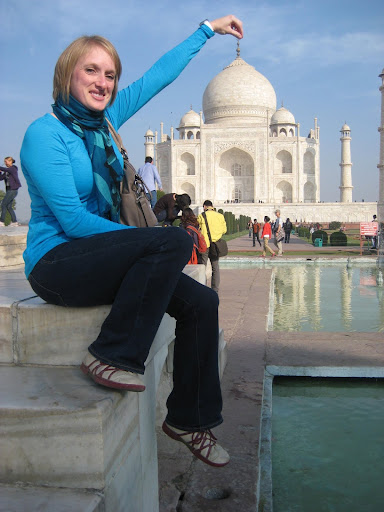 where’d i go? india. (delhi, agra, noida, and faridabad to be precise.)

what’d i learn? all the things.

a beeping horn can mean many things, but mostly, it’s not meant as an angry sound. the drivers have one hand on the gear shift and one on the horn.

there’s always room for one more car, one more lane.

their main driving philosophy is “save yourself. everyone else is an idiot.” and you know what? it works.

(except for the time that 6’1″ guy cut us off and clipped the front of our car. i was looking in the other direction at the cow crossing the street and didn’t see what happened. to me, it felt like we drove over some loose gravel, but then our 5’7″ very mild mannered driver threw the car in park and got out to inspect the damage. words were exchanged and our driver slapped the other guy who then grabbed our driver by the lapels of his uniform jacket, lifting him off the ground. his name tag and the top button of his jacket were ripped off. (fortunately, that was the extent of the drama and nothing other than more angry words were exchanged. oh, and we got a picture of the other guy’s license plate. we are good passengers.))

on the way back to the hotel, you’ll realize a beeping moped + a pointing finger signals something is wrong with the car. something like a flat tire. which needs to be changed in the middle of rush hour. in india.

if you put three slightly socially awkward people together, give them vague directions and no dinner and tell them to properly represent your company…it’s not going to end that well. it’s not going to end horribly either because we came away from that party with two things, (1) i found out i like tofu and (2) an architect told us the best way to see the taj mahal. see it FIRST. you’re there to see it, so see it, then see everything else in the town. it’s the best possible way to avoid the rampant overcrowding.

the taj mahal is pronounced taj ma-hell, or if you’re speaking quickly, tajmel.

it does not disappoint.

a tour guide is essential though, even if he thinks of himself as an amateur photographer and you become his current favorite subject to photograph.

dahl (from the restaurant bukahra) is the single best dish in india.

when you go from walking everywhere at home to riding in a car everywhere in india, you will get car sick from all the stop and go traffic and you might even develop a minor pavolovian response to the beeping horns: nausea.

the trees in lodi gardens are not only gorgeous scenery, but they provide just the right amount of support for amorous teens to lean against while making out.

when traveling in a group, at least one of the three of you will understand what’s being said to you and can translate for those that don’t.

learn your driver’s name and the number of the car because all cars in india look similar.

if you take a nap without setting an alarm, the knock on the hotel door will result in you flying out of bed, hair askew, to answer the door to find your boss staring at you. your brain will not function as the adrenaline and sleep crash into each other as you stand there trying to remember something, anything about where you are and what you need to do. fortunately, your boss’s hair is crazier than yours, and he lets you have 15 minutes to get ready.

if you attempt to switch drivers, the one you’re trying to avoid will be the first person you run into the next morning.

the hospitality of india will render you breathless (not to mention slightly guilty).

the conversion of rupees to dollars is best done on the app on your boss’s phone, not in your brain.

despite the name IPA (india pale ale), you won’t find any in india. (or at least we couldn’t find it anywhere we looked.) indian wine however is everywhere and is delicious (especially the sula brand).

delhi belly does exist. it is painful.

so are the side effects of the malaria prevention medicine.

and when you experience both at the same time? you become not the most fun travel partner.

you can plug your technological equipment into the wall with no adapter! it will feel like you’re about to do something really dangerous, like plug a camera battery charger into the wall the night before you go to the taj and pray your battery doesn’t fry rendering your camera useless before one of the biggest days of its life.

the “winter weather” in india is the nicest east coast spring weather you’ve ever felt.

a layover in paris is a really good idea.

the third time you attempt to get into l’orangerie to see monet’s water lily display will be the charm. the other two times just heightened the anticipation (silly construction keeping the museum closed in 2002 and 2004!). it is absolutely worth the wait and is now probably your favorite museum in paris.

your high school french will return and you’ll understand a surprising amount.

jet lag is a beast.

traveling half a world away truly changes your perspective on your surroundings, on your environment, on yourself and what you’re capable of (or not).